“Those who hope in the Lord will renew their strength.  They will soar on wings like eagles.” Isaiah 40:31. 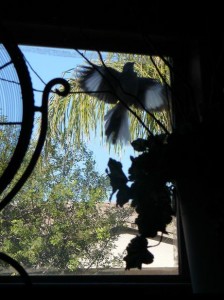 Perched on an almost non-existent edge outside of a small square window, sat the most determined bird I had ever seen.  As I watched, it sat for a short time, seemingly contemplating its next move.  It was a morning dove and had been visiting this particular window for several days now…each day going through the same routine.  I had no idea where it got the impression that what it was doing was a desirable effort, but it was determined nonetheless.  When I say determined, I am talking about unmitigated attempts to come through a permanently closed window.  Several times a day for several days in a row this bird would come, survey the area and decide that the dead sticks in a bucket sitting on the shelf inside our house were the most appealing place it could find to rest.  Over and over again it would try to burst through that window and perch on those twigs purposed only for decoration in our home.  Over and over again it would fly smack dab into the closed window.  After six or seven attempts to land on the unreachable branch, it would fly away just to return again a few hours later and the whole scene would replay. He came so often that our family decided to give him a name…Finnegan.  At first Finnegan’s antics were quite comical.  But, by the third or fourth day I was reminded of how God speaks through his creation and finally asked, “God, what are you trying to say?”

Birds are not created to fly in a room and sit on dead sticks in a bucket…they are meant to nest in beautiful lush trees and soar to heights beyond imagination!

Over the past several years I had been given the challenge of a very long and difficult journey.  To explain, I must start at a time much earlier in my life.  When I was a young child I felt I was alone.  I had no place to go…nowhere to turn when things got difficult.  I believed I didn’t fit in with my family … I couldn’t live up to their expectations.  I didn’t feel like I fit in with the kids at school.  I didn’t fit in with what the world said was acceptable.  I was alone.  The place I felt the safest was in our basement, rocking in the big leather chair, by myself…no one to judge me…no one to control me…no one to hurt me.  When I was in that space I felt safe.

I carried a modification of that behavior into adulthood.  When things would start to get too hard…I would go “into the basement and climb onto that chair” by closing myself off.  Deep down I believed I was the only one I really could rely on or trust.  I lived that way for many, many years wearing masks whenever I was around others.  I didn’t realize at the time that wearing those masks was like going in the basement.  It was my safe place…where I felt no one could hurt me.

Eventually I was called by the Lord to take a challenging, long, and difficult healing journey with Him through Mending the Soul.  It was amazing and I began to see who He designed me to be.  Little by little…step by step I became free…something like a bird.  I could fly – the weight of my pain was being lifted.  The more I healed the more freedom I received and the less I found myself “in the basement.”  Things were going along good.  I still had many issues to face and conquer, but slowly the Lord was carrying me through them.  Then quite suddenly I felt I had arrived at a place where I was extremely afraid to go.  Was I going to trust God here?  Could I actually take the steps this required of me? Then God sent Finnegan.

Then quite suddenly I felt I had arrived at a place where I was extremely afraid to go.

“Why God have you sent this bird?”  “God…what are you trying to say?”  As I contemplated these questions, I realized some things were for certain.  Finnegan had never actually been to the place where he was trying to go.  I know that because we have never once had a bird in our family room.  I also knew for sure that he wanted to go there.  That was evident because he was literally beating himself up trying to gain access into this unknown room.  Therefore, something must have looked somewhat familiar to him.  Remember that the window Finnegan was determined to enter was quite small and had never even been opened.  Had he looked beyond the window, he would have seen the walls and ceiling surrounding those sticks. But in his determination Finnegan seemed to only see branches just beyond his reach.  Branches, that seemed in his mind, to offer rest.  But they weren’t branches…they were dead sticks sitting in a bucket of rocks.  They weren’t stable by any means.  In fact, they were flimsy at best and probably wouldn’t even support Finnegan’s weight.  Of course, none of this was evident to him from the outside.  From his view it looked like the most perfect place to rest.  If Finnegan actually gained access to this place that he was so eager to enter, he would soon find out that being there took away much more than it would give.  He would find that suddenly he was stuck in a room…no longer free.  He would find no source of food, companionship, or space to truly fly.  The window was there for a purpose.  Finnegan was not designed to be inside that room. Birds are not created to fly in a room and sit on dead sticks in a bucket…they are meant to nest in beautiful lush trees and soar to heights beyond imagination!

As I looked at Finnegan I realized I had been like him, surveying my situation and because of fear I was trying in vain to perch on a branch that was less than desirable.  I had been looking through a narrow window only seeing what was vaguely familiar.  I had been seeking nothing more than lies…a delusion of comfort and safety that would only take away the new found freedom, companionship, and source of life God had provided and designed for me.  I was determined to attempt to protect myself from what I had experienced in the past…not realizing the vastness of what God has planned for my future.  I had been trying to get back inside the safety of the basement and the soothing motion of that rocking chair where no one could judge me, control me, or hurt me.   But that was a very lonely place.  “Those who hope in the Lord will renew their strength.  They will soar on wings like eagles.” Isaiah 40:31.  Through Finnegan, God was telling me He wanted me to trust in Him because when I do, I will soar!  God created me to soar!  He doesn’t want me to go running back to “the basement.”  He has set me free!  He has turned into good what was meant for evil.  When I choose to totally trust in Him I will be free to fly and nest in beautiful lush trees…free to soar to heights beyond imagination…free to be all He created me to be!

Through Finnegan, God was telling me He wanted me to trust in Him because when I do, I will soar!  God created me to soar!